Let’s take a look at our Interim Administrative Assistant Robbie and get to know her and George a little better. 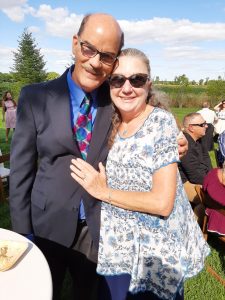 How long have you been married?

31 years. George and I were married by Rev. Terry Smith at The First Congregational of Ann Arbor on December 1, 1989. We became covenant members in 1990, and have been blessed over and over again by our relationship with this magnificent church and its welcoming and caring members. We are both honored to be part of this family.

How did you meet?

The short version is ‘at a poker game’. If you want to know, the long version goes like this…George and I met over 14 years before we ever considered dating. My best friend, Sandy, was, at the time, married to George’s younger brother, Jerry. The very first time George and I actually met was when we stood up together in Sandy and Jerry’s wedding. I was married to my first husband, and George was in a relationship with his girlfriend at the time. For 14 years, we were peripherals in Sandy and Jerry’s life. Our paths crossed at the annual poker games and occasional group bar-b-ques. George and I had our first date on December 31, 1988. I had been separated from my first husband for over a year and had filed for divorce. I, admittedly, had often thought ‘fondly’ of George. While I was separating and ending my first marriage, I would get away and spend weekends with Sandy and Jerry. Unbeknownst to George, I had set my sights on him and was already baiting the trap. He had been single for several years at that point and I knew he wasn’t dating anyone. I also knew he was at EMU part-time and driving bus for AATA full time and had no time to date. Perfect. Sandy knew the plan, so whenever I came over, she would invite George over for dinner and Euchre. We did this every 2-3 weeks for over a year, while never mentioning my marriage troubles. I thought it really important to find out if we were compatible as friends before I even thought about dating. So, imagine George’s surprise when I called him and told him that I was getting divorced and asked him if he wanted to come to my house with Sandy and Jerry for New Year’s Eve? They came and we rang in the New Year together, and Sandy and Jerry said goodnight at 12:15 a.m. George and I sat up talking about our potential future together until 4:30 a.m. We decided that if marriages could be pre-arranged and the couple could fall in love with each other, given the chance, why not us? We already thought we were great friends, and totally accepted each other for who we were, so, again, why not us? We agreed that we would commit to each other for as long as we were happy with each other, and would see where it went. At any time, one could say to the other that this is not working and there would be no hard feelings because we both knew that was the only way it was going to work. George has often said that this was like leading sheep to the slaughter. Our loving and conscious devotion to each other and our mutual desire to have an awesome marriage are the two constants in our life together.

Who said the LOVE word first?

As far as who said ‘I love you’ first, it was George. For many months, we were both ‘heavy in like’. I knew I loved George, but was afraid to say it; twice shy, you know. It was so easy after that.

Do you have a special song? If so, what is it?

Our special song was our first-dance wedding song, Only You by The Platters:

Only you, can make this change in me.
For it’s true, you are my destiny.
When you hold my hand, I understand the magic that you do.
You’re my dream come true, my one and only you.

What has each of you learned through your marriage?

George’s and my first reply is patience. And then, more patience. And, if all else fails, refer to the bible passage that starts, ‘Love is patient’. Repeat as necessary. We lean heavily on our sense of humor. We have also learned that you can spend (so far) 31 years with someone without yelling at them. One of our mottos is, ‘If you can’t use your words, please go away until you can.’ We have never gone to bed angry. We have learned that honesty is indeed the best policy. One of the best things we learned is that it’s okay to do things separately from each other. Finally, George’s two rules for a successful marriage are as follows:

Sum up your marriage in a Bible passage.

The following Bible passage was read at our wedding, and has been our go-to guide whenever we need gentle and truthful reminding:

Love is patient; love is kind; love is not envious or boastful or arrogant or rude. It does not insist on its own way; it is not irritable or resentful; it does not rejoice in wrongdoing, but rejoices in the truth. It bears all things, believes all things, hopes all things, endures all things. Love never ends.

Happy Valentine’s Day to everyone!